Start a Wiki
Cold Cat also known as Furbeast is Kelly's and Alex's cat, who is best known on both owner's social media. He has appeared in one of KPopp's facade videos and Whitboy7thst has made update videos on him. Kelly calls him Cold Cat while Alex hasn't thought of a name for him (he asked his subscribers) and calls him Cold Cat. Cold Cat has a heated relationships with Cat7thst and NomPopp since they need to get used to eachother.

The Saving of Cold Cat Edit

On January 9th, 2015 Kelly and Alex heard a cat crying outside their house while it was really cold and snowing outside. They found Cold Cat under their porch and tried to help him. They spent more than an hour trying to 'save' him while keeping the social media updated. They had tried using salmon to catch him and crawling under the porch where he was hiding. When Alex was about to crawl under the porch again, Kelly had successfully caught the cat. They kept the cat in their bedroom with salmon and put a security camera there to keep an eye on him. The following days they took him to a vet. They found out Cold Cat was male and didn't have any illnesses. The vet told them the owners of the cat had probably abandoned him because he had tons of extra fur (explaining the name Cold Cat). Kelly and Alex haven't found his owners (yet) so they decided to keep him, they both have told about his status in livestreams and Alex made several update videos. Of course they posted a lot of pictures of him on social media too. Kelly has said that the other cats would hiss at him so they kept them away from eachother to get used to their smell. Today the cats are still kept away from eachother and Kelly has told us Cold Cat is a really friendly cat, unlike Nom can be sometimes. 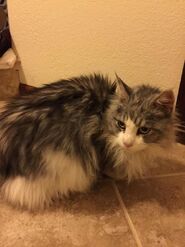 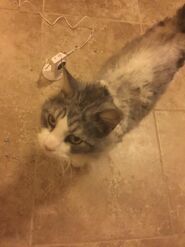 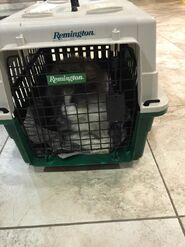 Add a photo to this gallery
Retrieved from "https://kpopp.fandom.com/wiki/Cold_Cat?oldid=8227"
Community content is available under CC-BY-SA unless otherwise noted.